The people given financial grants by the Trust have talents and ambitions that we helped fulfil. Apply for support and this could be you.

Here are some of their stories: 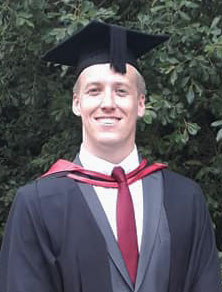 Ben Voyce is an excellent example of how the EWS Educational Trust can help grant recipients strike a balance between the various demands placed on them as they pursue their academic studies.

Ben studied at Aberystwyth University between 2013 and 2017, first geography for his degree then environmental change, impact and adaptation for his Masters.

So how did the grant help Ben?

“The grant made a big difference to me,” he said. “It gave me freedom.”

Ben explained: “Importantly, the grant lessened the cost of the academic aspects of university and of the accommodation, allowing me to use the money that I had earned from work and saved for the social side of university, which I feel was also very important in the university experience.

“I could afford nights out through which I made new friends and allowed me to afford to go on society trips and to events.

“The grant helped cover the cost of stationery plus the books that are required for certain modules and courses throughout both my degree and Masters.

“It also covered printing costs. This was particularly useful during my dissertation as I was printing dozens of academic journals to read through and gather information and sources from.”
Ben’s Masters was focused on environmental change, its impacts and how we could adapt to meet these impacts.

He studied environmental change, its underlying causes and historic examples of change compared to what we are seeing today.

He learnt the impacts of change across the planet and how future change would impact certain areas.

It was Ben’s father Greg, a member of the team repairing freight wagons and locomotives in Margam Yard, who told him about the Trust.

Thanks to being a grant recipient, Ben says he received help in almost every way while he was in university and is now looking to pursue a career where he can make a difference and help protect the environment. 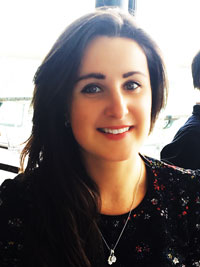 Laura Higgins first heard of the EWS Educational Trust and its financial grants from her father Michael Higgins, who is the Head of Business Development at GB Railfreight and who previously worked for EWS and DBS as the Commercial Manager on the London 2012 Olympics.

Laura was in her final year, studying for a Marketing BSc (Hons) at the University of Southampton when she applied to the Trust.

Having been successful, Laura used the grant money to help with her living and maintenance costs during her time at university.

“I received the grant during my final year and it made a huge difference to my life,” said Laura. “I was able to worry less about my student finances and focus more on my studies.

“My fourth year was extremely hard so having the extra time to dedicate to my work was a huge benefit.”

Laura described the Trust’s support during her final year as ‘incredible’. She added: “I am truly grateful for everything they did for me. It was a tough year and without the Trust’s help I wouldn’t have been able to do as well in my degree and enjoy my time at university.”

Laura highly recommends the Trust to others.

“It’s an amazing scheme,” she said, “and is so beneficial to those who are struggling financially during their studies.”

After a year in industry at The Walt Disney Studios as the Theatrical Marketing Intern, Laura gained valuable experience within film marketing from PR, research and media to creative, trade and sales.

It hasn’t always been smooth going for the now 23-year-old.

Laura was suffering with an illness that was a direct result of poor gut health in 2015. She created a dedicated blog to show other people who were suffering with the same problems what they should be eating to make themselves well again. She developed and shared recipes via her blog to promote the importance of good gut health and now has over 10,000 followers on her Instagram account (@GoodFLaura).

“I was very surprised at its popularity but I’m really happy that I’ve been able to share my wellness journey with so many people and hopefully I’ve managed to encourage others to adapt a healthy lifestyle.”

Laura is now working for Sony Pictures Entertainment in the digital marketing team on their new films.

“It is an extremely exciting industry to be working in and I am thoroughly enjoying my new job.”

Trust helps Connor get the best out of university 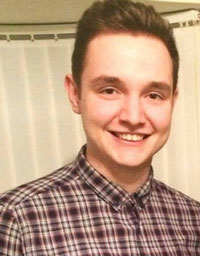 Studied Law with German Law at University of Sheffield with a year abroad at Freie Universität Berlin.

Rail freight connection: parents work for a freight operating company as a payroll supervisor and a freight train driver.

As he began his final year in September 2016 Connor explained that the support he received from the EWS Educational Trust has made a genuine difference to his studies.

“It has allowed me to truly get the best out of university, my year abroad and all of the associated opportunities without financial concerns.

“As I was applying for university tuition fees were increased to £9000, which made me question whether university and the year abroad were really viable.

“I knew that student loans and a small income from my part time job would help to support my studies but I still had some concerns. I applied for the grant for extra financial support, specifically for my year abroad, which would mean I could work hard and enjoy university without having to worry so much about the costs.

“The Trust gave me funding for all four years of my degree, including a grant for books and supplies in first year, and extra funding for my year in Germany. This was invaluable.

“Everyone should have the opportunity to try something new or push themselves to achieve their goals and financial concerns shouldn’t stop that.”

By helping Connor with his studies, the Trust has enabled him to work towards achieving a personal goal. That is to be offered a training contract from a leading global law firm after his final year. 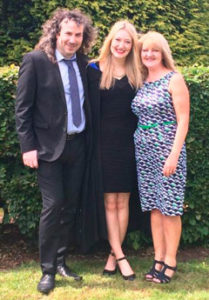 Rhiann Brown studied accountancy and finance at Heriot Watt University while her sister Rebecca took illustration at the Edinburgh College of Art.

It was the freight train driving father of Rhiann and Rebecca Brown who first told his daughters about the Trust.

According to Rhiann she had been working part time throughout university but didn’t want to rely solely on her parents or student loans to achieve what she felt was within her grasp – a first class degree.

So Rhiann used the money given by the Trust to help cut her hours and therefore reduce her reliance on working.

The funding clearly helped as Rhiann graduated in 2015 with a first and has started a traineeship to become a Chartered Accountant.

“I graduated in 2015 with a first class degree as I had hoped, and having the support of the Trust really did help me to achieve this.” 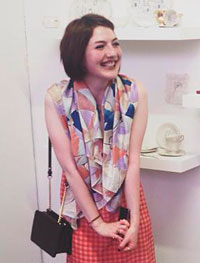 Rebecca said she hopes to become a full time illustrator and the help of the trust has given her a very positive start towards reaching her goal.

Rebecca applied to the Trust for two grants – one for her MA in illustration at the Edinburgh College of Art and another for being the Artist in residence.

“I applied for a grant following my undergraduate degree in textiles in order to help with the costs of my MA in illustration at Edinburgh.

“I received a grant that exceeded what I had hoped,” she said. It enabled me to concentrate on my degree and enjoy it without having huge financial worries.”

Rebecca worked successfully on her MA and became the Artist in Residence at Edinburgh College of Art.

“The trust awarded me a second grant towards the cost of materials, which has been invaluable as it has enabled me to concentrate on making work and gaining freelance commissions which would have been very difficult as the position is unpaid.

Both Rhiann and Rebecca said applying for their grant was relatively easy – and any communication they had with the team at the Trust was helpful and friendly.

And they would definitely recommend others apply.

That they were sisters posed no problems for the Trust and Rhiann and Rebecca both applied successfully for funding. 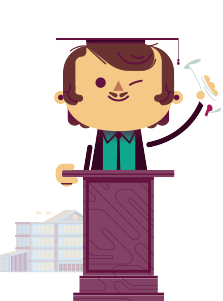